In the Japanese language, the word ‘anime’ quite literally translates to hand-drawn. But, when a conversation strikes about animes, the only thing people discuss is how awesome they are! Having deep storylines, well-developed characters, and an altogether different art style that has garnered fans all across the globe, animes offer a lot to be impressed with. From cult classics like Cowboy Bebop, Beyblade, Bleach, Dragon Ball Z etc. to modern developments like Attack on Titan, Death Note, One-Piece etc., the world of animes has stayed true to its core. Well, so have the fans of this Japanese creation. Even animes without English dubs have enjoyed a huge fan base worldwide. 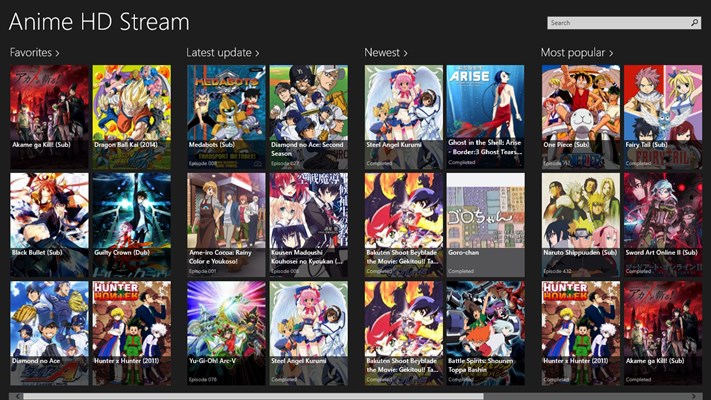 In fact, some fans embark on the journey to learn Japanese just to savour the flavour of animes in a better way. However, animes are not as abundantly available on the internet like some of the other products of the entertainment industry. However, there is still hope for anime enthusiasts as the following 7 sources offer legal ways to enjoy their beloved shows.

Crunchyroll is probably one of the most popular anime sites available on the internet. With a database as huge as the muscles of Goku, CrunchyRoll has a lot to offer. Furthermore, there’s an option for free streaming of some selected animes. With the availability of an android and an iOS app, CrunchyRoll lets you watch animes on the go as well. There are a few membership plans to choose from, and the value for money is undoubtedly excellent. For about $7, you can gain access to 12,000 hours of content.

The best thing about Netflix is that there is something for everyone there. Fans of Japanese animated shows need not look any further for their favourite source of video entertainment in order to enjoy all-time greats like Sword Art Online, Fullmetal Alchemist, Fairy Tale, Attack on Titan and more. However, some big names like One Piece don’t make it to the catalogue of animes on Netflix. The best thing about enjoying animes on Netflix is that you get access to a plethora of other content as well. Needless to say, all over the world, value for money doesn’t get any better than Netflix!

Hulu, yet another streaming service offering a wide range of diverse content, just like Netflix, is another viable option for legally watching animes online. However, the biggest drawback to Hulu is that it’s only available in the US. Even though there are ways to view it in other parts of the world as well, but they aren’t as straightforward as pressing the play button on an online media player. Nevertheless, Hulu offers an impressive library of animes to dive in for marathons!

Among many other benefits of subscribing to Amazon Prime, one is that you gain access to an anime library of Amazon Prime Video. With more than 80 Japanese animated shows to choose from, Amazon Prime Video has registered itself as another viable source for watching animes online without encouraging piracy or breaking any laws. Amazon also offers a service called Anime Strike along with the prime video package that provides its subscribers with new episodes every week and a free manga every month.

Funimation has been a name associated with animes as popular as Dragon Ball Z since a very long time. With its very own online streaming service, Funimation offers a huge catalogue of animes to watch. Available in United Kingdom, United States, Australia, New Zealand and Canada, Funimation boasts a library of 300+ anime titles. With the option of free streaming of a limited number of animes as well, Funimation is definitely an option worth checking out.

Even though there aren’t era-defining animes like Hellsing, Fate/Zero or Monster available on Viewster, its catalogue of 70+ animes is worth checking out for the sole reason that it is absolutely legal and absolutely free. Furthermore, the shows available on Viewster are not like rotten apples destined for a dumpster. They are good shows, if not great! Available in 120 countries all around the world, Viewster is a viable option for legally streaming anime online despite the lack of any big names.

Anime-Planet is yet another extensive source for watching more than 200 anime titles. With popular names like Naruto Shippuden, Brotherhood: Final Fantasy XV, Boruto and more, Anime-Planet offers quite a lot for free. Having partnered with CrunchyRoll, Viewster, and Hulu, access to Anime-Planet is available on a global level. However, the library of shows depends from country to country.

In a nutshell, whether you want to enjoy the story of a doctor turned into a serial killer, or witness the journey of Saiyans protecting planet Earth, there are legal ways to do that! That way, the developers and everyone else associated with the creation of animes benefits as well. If the fans truly unite, maybe the world of anime won’t die after all!