7 Reasons to consider creating a progressive web app in 2019

Traditional mobile responsive websites have slow loading times, and native mobile apps take up a lot of storage space in smartphones and tablets. It’s also a lot to ask of people to download a new app. AMP is fast, but severely limiting. This makes it difficult for web developers, marketers, designers and business owners to deliver engaging user experiences in the smartphone era. 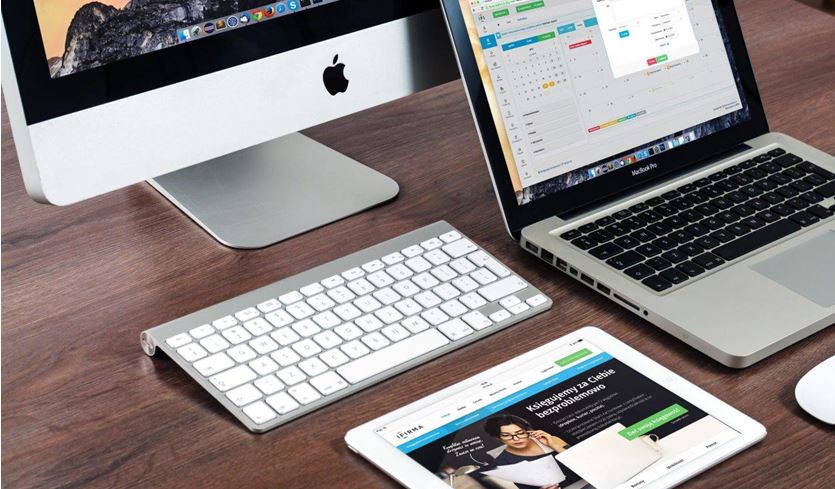 PWAs allow you to improve the usability and user engagement of your site, improve loading times, and deliver enhanced user experiences regardless of the user’s device. Plus, as an added benefit, you’re able to cut development costs and spend your time improving your business.

In this post, we’ll step through some of the main reasons why you should consider experimenting with progressive web apps. But first, let’s take look at what PWAs are and how they’re different from native apps and websites.

What Are Progressive Web Apps?

In simple terms, a PWA is a combination of both a native app and a website. It’s a revolutionary technology that’s changing how content is delivered to users and has helped make websites more mobile-responsive and user-friendly. Smashing Magazine, Flipboard, Kana, and The Washington Post are all examples of successful browser-delivered media experiences that happen to also be PWAs.

PWAs deliver content regardless of the device and network speed of the user. It uses HTTPS to secure the user’s network connection and doesn’t automatically reload site content without the user’s permission.

It’s easy to understand why mobile users prefer the app-like experience that PWAs offer as compared to interacting with traditional websites. For instance, PWAs boost user engagement by implementing easy-to-access toolbars and elements as well as other useful features like click-to-call, push notifications, accessing the camera, and geolocation services. Websites need special permissions to do things like that.

AppInstitute compiled some statistics from Google’s case studies on PWAs that indicate a 68 percent lift in mobile traffic compared to mobile websites. Bounce rates were reduced by nearly 43 percent with PWA implementations. 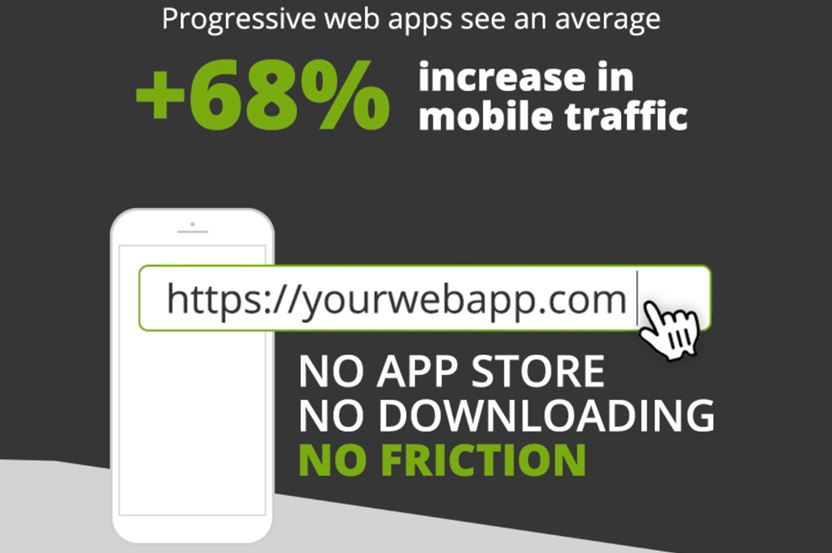 Here are some of the key benefits of PWAs:

According to Mobify, the opportunity cost of delaying PWA implementation is significant. Every minute you delay implementing PWA is a minute spent with 20 percent less revenue. 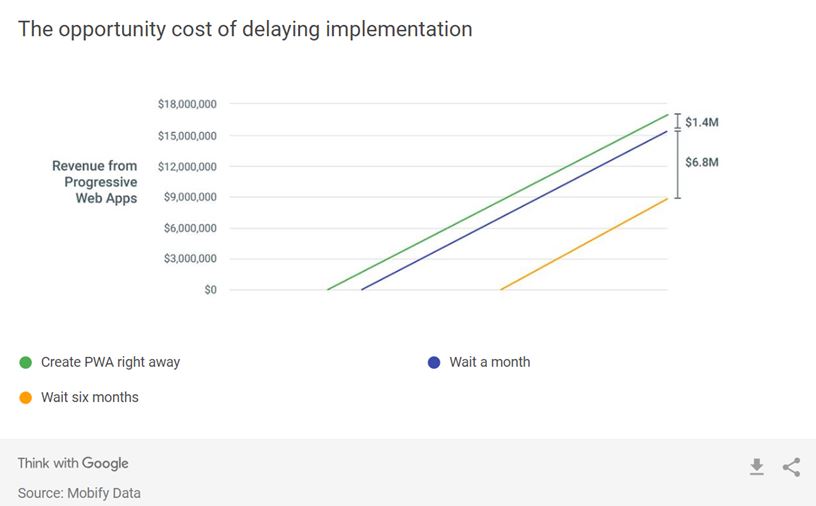 Now that you know what PWAs are, let’s look at how your business can benefit by using them instead of traditional websites or native mobile apps.

Why You Should Consider Creating a Progressive Web App

Here are some of the main reasons why you should seriously consider creating a progressive web app for your digital presence.

One obvious benefit of PWAs is that they are hosted on a web server, meaning they’re not linked to an app store. This means that you don’t have to deal with the strict code vetting of the big app stores, and you don’t need to ask anyone to go through a whole process on a third-party platform to access your content. If someone visits your website and it’s available in PWA form, they’ll see a prompt to that effect – soon on desktop browsers as well. 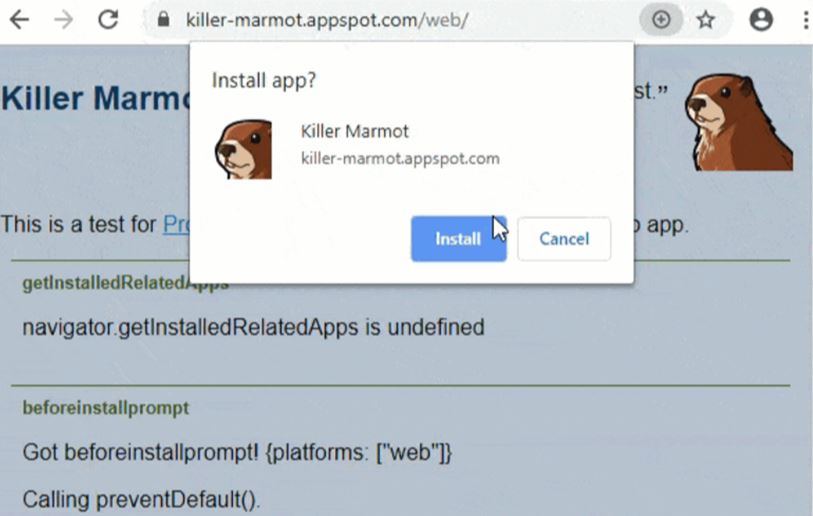 Most popular app stores – like Apple’s App Store and the Google Play Store – have strict compliance guidelines. These include regularly having to update older versions of your app to meet their ever-changing requirements. You also have to create different versions for each app store. The iOS version of your app will be in Objective C whereas the Android version will likely be programmed using Java.

A PWA is a great alternative to bypass app store requirements and the many roadblocks that can come with them. This gives creators the freedom to create and deploy apps that meet your personal requirements. In addition to this, you won’t have to manually update your app on the app store because its latest version will instantly be available to users.

Reason #2: They Work Across All Devices

To fully harness the power of an app, you need to make sure it’s compatible with all commonly used devices including desktop computers, laptops, tablets, and smartphones. PWAs are connected to an online server which means that they’re device-agnostic – i.e. they work with all devices without requiring any special adaptations. This enables users to access your site and content while they’re at home, on the go, or at the workplace.

PWAs enable users to switch between different devices without interrupting their session. For instance, if a user opens your app on their phone and halfway through they want to switch to their laptop, they can simply open the app’s computer version and continue from where they left off. Mobify, for example, lets users create enterprise commerce PWAs that work seamlessly across all screens.

Reason #3: They Have Lower Development Costs

Businesses often end up hiring dedicated programmers – either in-house or third-party agencies – for app development in addition to bearing the costs of maintenance and quality assurance. They also have to ensure that newer versions of their app is compatible with different devices and operating systems.

With PWAs, you don’t have to worry about recurring development costs. Since they’re hosted online, they can seamlessly be integrated with all mainstream devices – regardless of the operating system they’re running. It’s much easier to maintain and update a PWA as compared to a native mobile app. 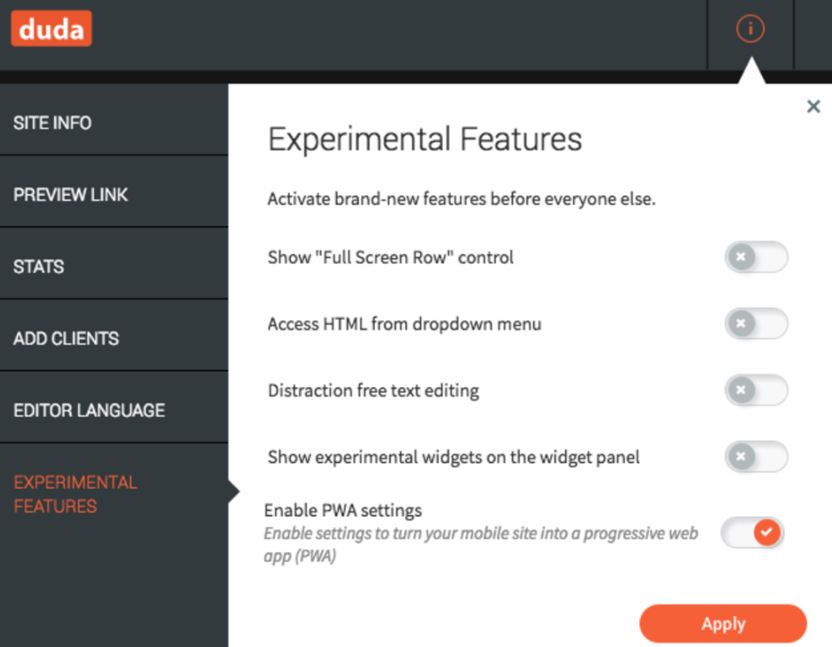 The Duda web design platform, for example, makes it easy for agencies to enable PWA on every site they build for clients, without having to mess around with the technical side of things. And any time the site design or content is updated, the app will automatically update as well.

Studies show that mobile visitors abandon a website if the page doesn’t load within three seconds.

Considering that these visitors might be prospective customers, you can end up losing on a lot of business just by having a slow loading site.

PWAs are optimized for fast loading times and can even work offline or on slower networks. Service workers (the bits of code that query servers to load more content only when the user interacts) work in isolation from the web page. 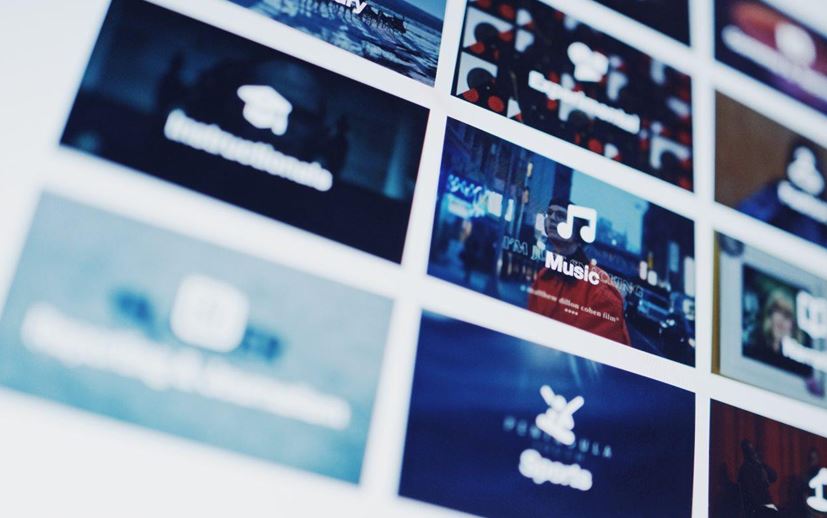 So if you’re looking to improve visibility in SERPs, PWAs can help you get more traction, attract more qualified leads, and ultimately improve conversions.

People spend more time on websites that have fast loading times and deliver enhanced user experiences. The same is true for web applications. By making your web app mobile-responsive and simplifying its navigation, you’ll effectively improve the overall user experience it delivers and increase the actions that you want users to make. 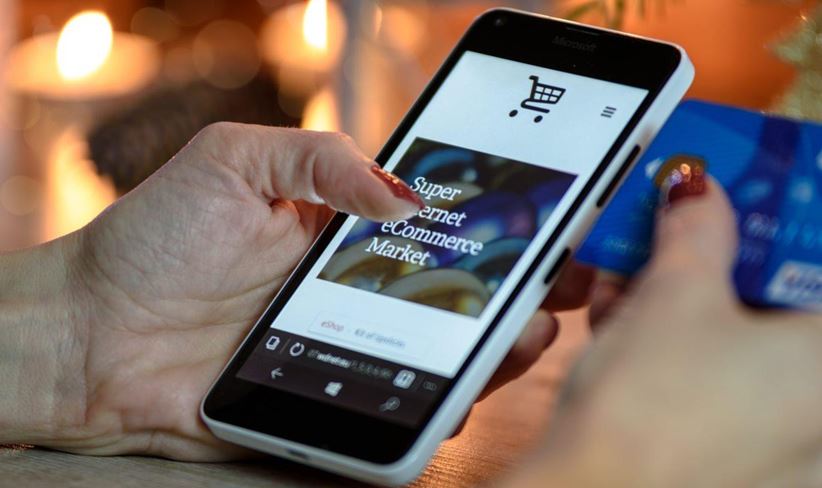 If you’re looking to improve your conversion rates, generate user engagement, or increase dwell time, progressive web apps can help you do just that. Apps that allow full-screen browsing, switching between apps, instant page loading, and minimal use of device resources improve user experience and keep users coming back for more.

Most apps are turning towards giving users offline access to their content, and this is one of the standout features on offer with PWAs. As described above, service workers work in the background enabling your app to perform tasks like caching data, sending push notifications, and reloading content upon user interaction. This means your app works faster and content is instantly surfaced for users to consume.

When Uber started to expand to new markets, it needed an app that wasn’t restricted by the device or network speed of the user. Using PWA technology, Uber was able to implement smaller libraries and SVGs to build a tiny (50 KB) core app with loading time of about two seconds.

PWAs can help your business deliver content and services to customers in a faster, leaner, and more efficient way. If you have a WordPress-powered website, you can use a plugin like Super Progressive Web Apps to convert your site to a PWA.

It’s easy to see that PWAs are the future of mobile interactions and you need to integrate them with your mobile-internet strategy to remain competitive. They take the strengths of native mobile apps and traditional websites and turns it into something that’s more inline with what mobile users want.

« Career trends: top 5 tips to switch from graphic design to motion design
Optimizing your laptop for photoshop – tips and tricks »